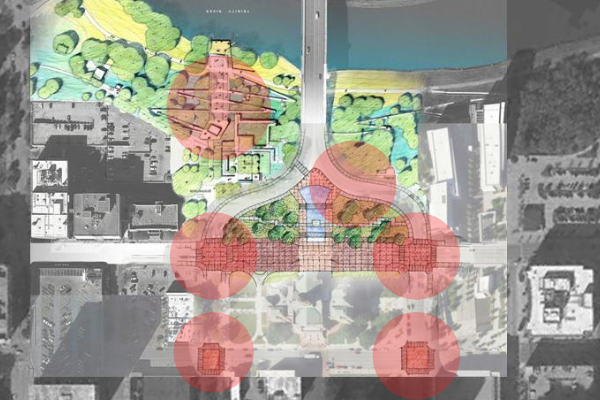 The North Central Texas Council of Governments Surface Transportation Technical Committee received the plan and sent it forward for approval of the Regional Transportation Council without comment or objections.

Projects in four different North Texas counties are on the list with money transferred from a 5th county to help make the deals work.

In Downtown Fort Worth, pedestrian crossings around the Tarrant County Courthouse are hazardous. Fort Worth’s Heritage Park is across a busy street from the Courthouse.

“That is a problem with people running lights, and not paying attention,” she said. “People get run over a lot, just crossing.”

The North Central Texas Council of Governments plan lines up more than $9 million from several sources to improve sidewalks for people on foot, on bicycles and in wheelchairs.

NCTCOG Transportation Director Michael Morris said the new effort is a twist in the approach that was used after the 2009 financial crisis to create jobs and boost the economy with big transportation construction projects.

Planners are working to find the money for needed work on the drawing boards that would have been done eventually but could be done sooner.

NBC 5 reported Tuesday on some of the bigger jobs. The smaller ones were brought forward for the first time Friday.

The NCTCOG lined up more than $3 million to design and build a walkway through a freeway overpass to connect the two sides.

Bachman Lake Park in Dallas is popular but has no sidewalks to connect with the crowded apartment complexes in the Love Field neighborhood around the park. A $1 million study of pedestrian links for the area is in the plan.

In Parker County, two schools will open the next two years in Aledo but roads to serve the schools are lacking. A developer will chip in $2 million for almost $15 million in Aledo road work in Friday’s plan.

A funding category swap with Denton County will help expedite the Aledo work and keep money available for Denton County, work as well.

In the Kaufman County City of Terrell, FM 429 is to be realigned across US 80 and the Union Pacific Railroad tracks. Around $10 million in Friday’s plan will adjust the railroad tracks and rebuild the highway and railroad crossings to keep trains and vehicles moving.

Back in Fort Worth, Dee Gaucin is looking forward to the changes.

“It would be a good thing because we work here many years,” she said.

The Regional Transportation Council must still approve the plan that was endorsed by the Committee Friday and then individual cities must officially receive the money, hire contractors and start the work.

The Transportation Director said it is a faster arrangement than there might have been otherwise for these jobs.