Crowds are discouraged for Fort Worth’s Fourth. How the city hopes you watch the show 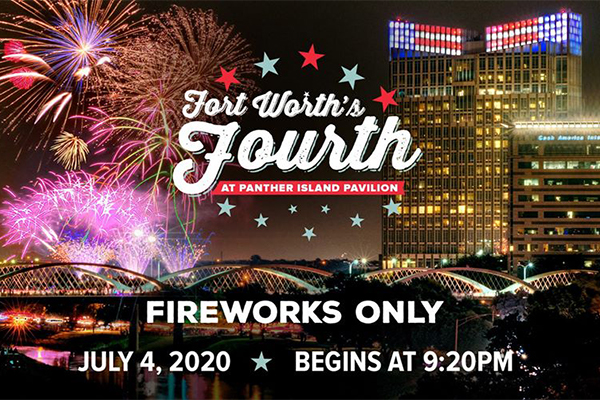 Large gatherings are discouraged and businesses must require masks as the number of coronavirus cases climb in Fort Worth, but the city’s massive fireworks display will go on with officials encouraging people to watch from home.

The reason is simple: It’s a Fourth of July tradition and Fort Worth’s Fourth is the largest fireworks show in North Texas.

Several steps have been taken to limit where people can gather, but folks may still be tempted to come to the downtown area along the Trinity River. Panther Island Pavilion will be closed and several blocks north of downtown will have limited access.

Mask decrees Tarrant County Judge Glen Whitley and Fort Worth Mayor Betsy Price issued last week require those outside in groups of 100 or more to wear a mask. They also require businesses to ensure both employees and customers wear masks inside. The mandate is enforceable through a $500 fine for businesses found in violation.

Enforcing the mask rules will be tricky on the Fourth of July, said Brandon Bennett, the city’s health officer.

Under the city’s edict, event organizers can’t bring more than 100 people together, he said. If 100 strangers end up in the same place, like a park, and it’s not a planned event, the city will encourage mask wearing and distancing.

“People know to wear masks, know to stay away from large public gatherings,” Bennett said in an email. “We hope that this will minimize this behavior but also recognize that if it occurs on July Fourth there will not be a lot of direct city intervention.”

Fort Worth police officers, particularly the seven officers in the Pandemic Response Team, will be enforcing the mask rule for crowds. The focus will be on education, said Officer Brad Perez. Gov. Greg Abbott’s order does not allow municipalities to fine individuals for not wearing a mask.

The focus remains on safety, Tarrant Regional Water District board member Jim Lane said in a statement, but the district and sponsor Lockheed Martin wanted to “provide something special for our community.”

“A fireworks show gives families, and especially our children, a sense of normalcy and something to look forward to in these trying times,” Lane said. “This year’s show celebrates those that fought for our freedom and honors first responders, health care workers and everyone on the front line.”

To discourage gatherings near the fireworks show, a large portion north of downtown will be barricaded and closed to traffic, said Matt Oliver, a spokesman for the water district.

The area is essentially the future Panther Island site — the north bank of the Trinity River from Henderson west to where the river flows north. The area includes Oakwood Cemetery on the north side and the Panther Island Pavilion on the south bank.

The fireworks will fly significantly higher than in past years so they can be seen from farther away, Oliver said. The traditional ground effects, such as waterfall-like fireworks, will be replaced with more aerial fireworks.

KDFW Channel 4 will broadcast and live stream the show, which is expected to start at 9:20 p.m. The hope is people will watch the show from their backyard, balcony or TV, he said, rather than gather in large groups.

Trinity Park will also be closed to vehicle traffic beginning at 5 a.m. Saturday, but people can still access the park on foot or by bike.