The Dallas-Fort Worth area continues to be one of the fastest-growing regions in the country, and its expansion shows no signs of slowing down. To provide a transportation system that is reliable and efficient for decades to come, planners must think creatively.

Traditional roadways, passenger rail and bicycle-pedestrian facilities will remain important to moving people and keeping the economy healthy. But a region that is expected to eclipse 11 million people by 2045 is also embracing innovation. From electric vehicles that do not require gasoline to automated vehicles, North Texas welcomes new ways to travel. Among the potential innovations planners are considering is high-speed transportation. 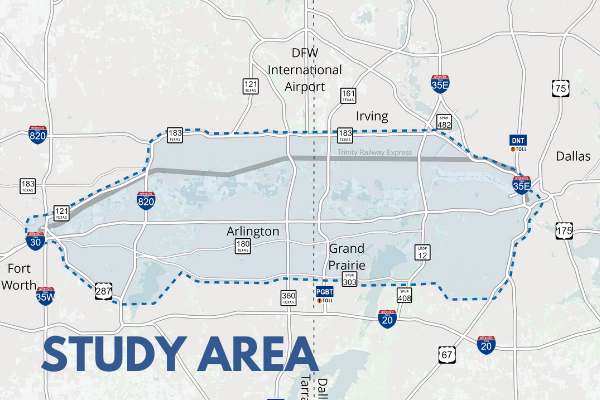 The North Central Texas Council of Governments has begun the Dallas-Fort Worth High-Speed Transportation Connections Study, a look at potential high-speed technologies and alignments for the Dallas-Arlington-Fort Worth corridor. High-speed service between Dallas and Fort Worth would potentially connect to other high performance systems planned in Texas. Further population and employment growth will increase travel demand and place greater pressure on existing transportation services.

This study will review high-speed options in the Dallas-Arlington-Fort Worth corridor by analyzing potential routes, alternatives, operations/service planning, and preparing preliminary engineering and environmental documentation for high-speed passenger service. It will also examine potential routes and highspeed transportation modes between Dallas and Fort Worth. North Texas is spending billions of dollars on transportation improvements, but rapid growth makes it hard to keep up by just building more roads. The existing roadways remain congested, although North Texas is ahead of many of its peers in terms of reliability. A high-speed option would also improve efficiency, with travel times between Dallas and Fort Worth and beyond reduced significantly.

This is a 36-month study, with a goal of identifying a passenger technology and potential route and receiving federal environmental approval. Once the environmental approval is given, the next phases (securing funding, detailed design, right-ofway acquisition, construction) of the project can begin.

The chosen technology would connect to a separate high-speed passenger rail service being planned between Dallas and Houston, and a potential high-speed passenger service linking Fort Worth to South Texas. A high-speed transportation service would improve mobility by providing more choices and could reduce congestion by giving North Texans an alternative to driving.

The opinions of the region’s residents are an important part of the study and will help planners and policymakers determine what technology and route are chosen. To learn more and stay up to date on the latest developments in the DFW High-Speed Transportation Connections Study, visit www.nctcog.org/dfw-hstcs.