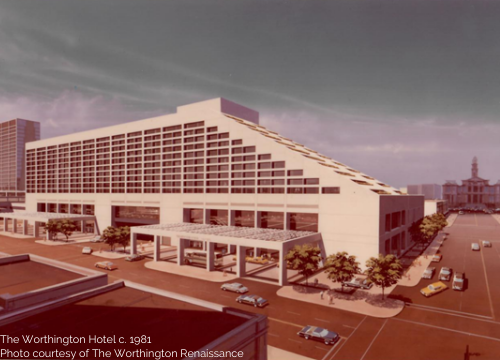 Since becoming one of the first buildings to open in Sundance Square in 1981, The Worthington Renaissance Fort Worth Hotel has been at the center of the city for four decades.

Throughout April and May, the iconic Fort Worth fixture located in the heart of downtown at 200 Main St. is celebrating its 40th anniversary.

Inspired by the inaugural night back in 1981, the festivities began with a private party co-hosted by general manager Drew Hayden and Visit Fort Worth president and CEO and former general manager Bob Jameson. Throughout the evening, guests will have the opportunity to traverse the historic timeline by partaking in various events across the hotel, beginning in the lobby with an '80s-themed party and ending at the terrace with libations, ice sculptures, and a sweeping overview of the city.

Recently, The Worthington underwent its own renaissance with an $8 million renovation project, so this celebration serves also as an unveiling of the transformation.

“This hotel has been under construction for almost four years now,” Hayden says. “I think [hospitality company] DiamondRock took a strong look at the position this hotel could have and does have and how important it is to the town. They saw this capital expenditure investment was well worth the while.”

The general public can partake in the celebration by taking advantage of anniversary room-rate packages, tuning into a new virtual Worthington Worthy Talk Series, enjoying daytime entertainment, trying Toro Toro’s limited-time menu, and taking a tour of the hotel to peruse the historic artwork, photographic prints, and advertisements which will be on display.

For a brief period before The Worthington became the four-star, 504-room hotel it’s known as today, it was the Hotel Americana. The Worthington was the first part of Sid Bass and the Bass Brothers Enterprise’s vision to reinvigorate the city of Fort Worth through a redevelopment plan. The original grand opening on April 15, 1981, was an invitation-only extravaganza with performances by Maypole Dance from Madame Danilova and 16 of her students from School of American Ballet in New York City, as well as music by Jimmy Lyons of the Waldorf- Astoria, The Bill Harrington 11-piece Dance Orchestra, and The Texas Little Symphony.

In proximity to many popular attractions, including the Kimbell Art Museum, Fort Worth Stockyards, and Texas Christian University, The Worthington Renaissance Hotel serves as a staple for all surrounding establishments. The hotel’s anniversary celebration is intended not only to honor the history of The Worthington but that of the city as a whole.

“Everyone wants The Worthington to be the jewel it always has been," Hayden says. “This is a leisure city designed to have leisure travelers on the weekend, and we’re all here to help Fort Worth remain the tourism attraction that it is. We’re all one family in Fort Worth.”

Updates and more information can be found on The Worthington’s Facebook page.