When Black people weren’t allowed to enter downtown businesses and hospitals in the Jim Crow era, they built them themselves, giving birth to Black business and medical districts in the 1920s. 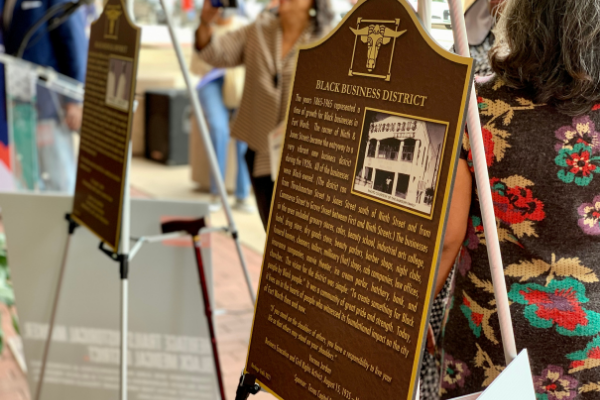 Historical markers to honor the two districts were unveiled Friday.

People visiting downtown “will think of the entrepreneurs that stepped forward and provided services for their community when they weren’t welcome across the city,” said Fort Worth City Council member Elizabeth Beck.

Many of the businesses and health care facilities have been demolished. The rise of desegregation caused the Black-only businesses to falter.

“Progress? We’ll let history judge that,” said Tarrant County Commissioner Roy Brooks. “What we are here to do is to recognize those visionaries and those families who populated that Black business district and made it sing.”

The two markers will be featured in Fort Worth’s Heritage Trails, a series of plaques that detail the city’s significant events.

“I am delighted that we are acknowledging the impact that African-Americans have made and continue to make in the development and progress of Fort Worth. This is important for all generations to know and to appreciate,” said Sultan Cole of the Fort Worth Metropolitan Black Chamber of Commerce.

Downtown’s Black business district featured grocery stores, cafes, insurance companies, tailors and other stores. It covered the blocks on Commerce Street and Grove Street between First and Ninth streets, and included the area south of Ninth Street between Throckmorton and Jones streets.

The district was particularly significant because of its size and central location, said Brenda Sanders Wise of the Tarrant County Black Historical and Genealogical Society.

The medical district featured a clinic, a hospital and a nursing school. One was Brooks Clinic, founded by Dr. Marion Brooks in 1952. Dr. Riley Ransom opened the state’s first hospital for African-Americans. And other Black physicians, like Dr. Edward Guinn, provided health care in other areas of the city.

“These men were brave trailblazers, who against all odds forged ahead so that their brethren could enjoy access to quality health care,” said Dr. Michael Brooks, a Fort Worth general surgeon.

“If you are my age, or even older, there’s not a one of you who wasn’t touched by somebody named Dr. Brooks taking care of your health,” said council member Gyna Bivens.

Lisa McBride, associate dean of diversity and inclusion at the TCU and UNTHSC School of Medicine, said the event was emotional.

“We’re standing on the shoulders of their greatness and the sacrifices that they made,” she said. McBride said she’s continuing to work to diversify the medical field.