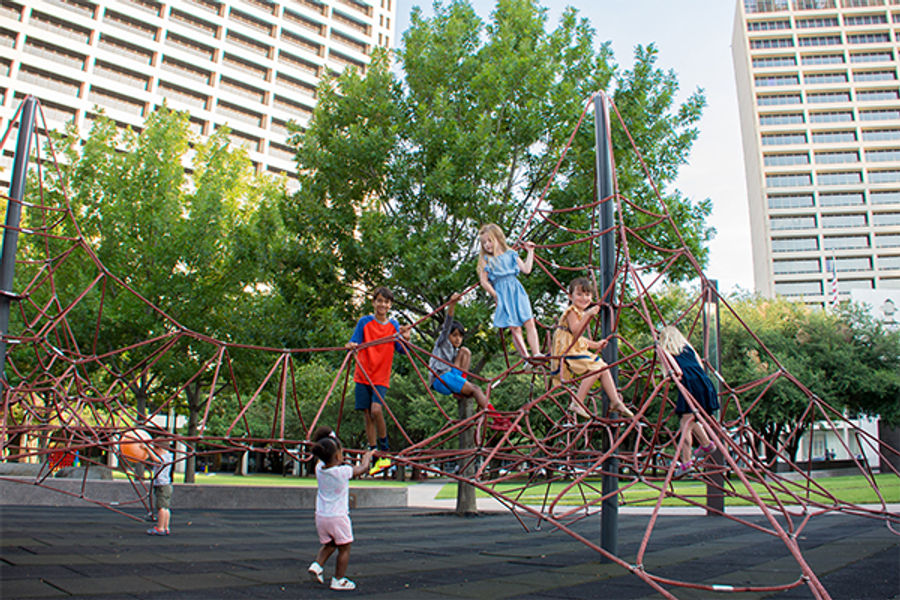 “It’s fitting it was presented there as the 2033 strategic plan includes a focus on the creation and maintenance of downtown parks,” said Andy Taft, executive director of DFWI.

Taft said more improvements to the park are coming.

“We’re about to upgrade the play area for children,” he said. “This endowment is the second of what we hope will be a series of endowments for downtown parks.”

DFWI is also working on the renovation of Heritage Park and Paddock Park on the north edge of downtown.

Burnett Park, located on three acres at 501 W. 7th St,  opened in 1917, a gift of Samuel Burk Burnett in honor of his two children. Under its original design, by George Kessler, it was the site of presidential visits and the annual city Christmas tree.

The current park was designed by Peter Walker with SWA Group in 1982 and updated in 2010. DFWI managed that park improvement project with a $1.7 million grant from The Burnett Foundation. DFWI has maintained the park through a contract with the city of Fort Worth since 2002. Also in 2002, Jonathon Borofsky’s iconic, 50-foot tall sculpture, “Man With Briefcase” was installed on the north end of the park near West 7th Street.

“The Burnett Foundation’s generous gift will allow DFWI to continue maintaining and operating Burnett Park for future generations,” said Larry Anfin, DFWI chairman. “The endowment is a lasting legacy that pays honor to the original donation and construction of the park 105 years ago.

In July, the late Anne Marion and The Burnett Foundation made a $25 million gift to establish The Anne W. Marion Endowment in support of the operations of the TCU School of Medicine. Marion was the great-great granddaughter of Samuel Burk Burnett, founder of the Four Sixes Ranch and a Fort Worth businessman.