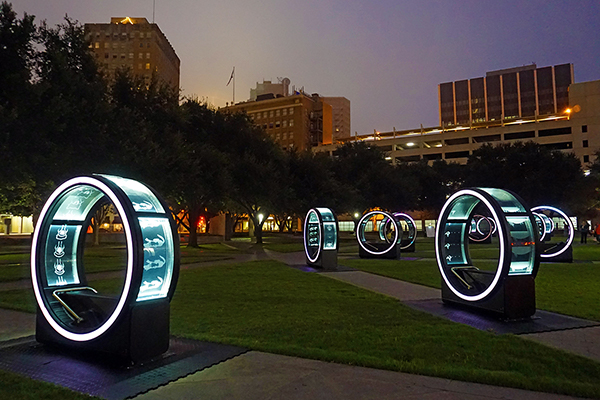 Picture a large wheel, or cylinder, with an outline that glows in the dark. Inside, there are two seats and a lever, kind of like the lever used to propel old railroad flatcars. The two people in the seats move the lever back and forth, projecting images inspired by childhood fairy tales.

Now imagine 12 of those large cylinders in a downtown Fort Worth park — or just drop by Burnett Park starting on Friday.

That’s when Loop, described as a “life cross between a music box, a zoetrope and a railway handcar,” will make its Texas debut in downtown Fort Worth. It’s a family-friendly musical installation consisting of a dozen giant zoetropes, defined by Webster’s as “an optical toy in which figures on the inside of a revolving cylinder are viewed through slits in its circumference and appear like a single animated figure.”

Except the original zoetropes were, well, the size of a toy, and these are big enough to fit two adults.

It is perhaps best described by the above video, which, well, is in French, because Loop was first presented as part of the Luminothérapie at the Place des Festivals in the Quartier des Spectacles in Montreal in 2016-2017. But if you can’t speak the language, you can definitely see the visuals. And here are a couple of other videos without any narration.

Loop has visited other U.S. cities, including New York, where there were only six of the 9-foot-high wheels in the Garment District, according to a New York Post story.

Burnett Park, which is bordered by West 7th, Lamar and 10th streets in downtown Fort Worth, is already home to an unusual piece of art: “Man With Briefcase,” Jonathan Borofsky’s 50-foot-tall brushed-aluminum silhouette of a fedora-wearing man sporting a briefcase, installed in 2002.

The fourth border of the park is the 40-story Burnett Plaza, the tallest building in Fort Worth. But unlike in the videos, images will not be projected onto the side of the building.

Admission to Loop is free. The installation will be open from 8 a.m. to 10 p.m. daily Sept. 28 through Oct. 28. Metered parking is available nearby, and free on weekends and after 6 p.m. weekdays. Nearby parking will also be available after 6 p.m. in a lot at 9th and Cherry streets, just to the west of Burnett Plaza.

For more information, visit the website of Downtown Fort Worth Inc., which is bringing Loop to the city. For more parking tips, visit www.fortworthparking.com/downtown