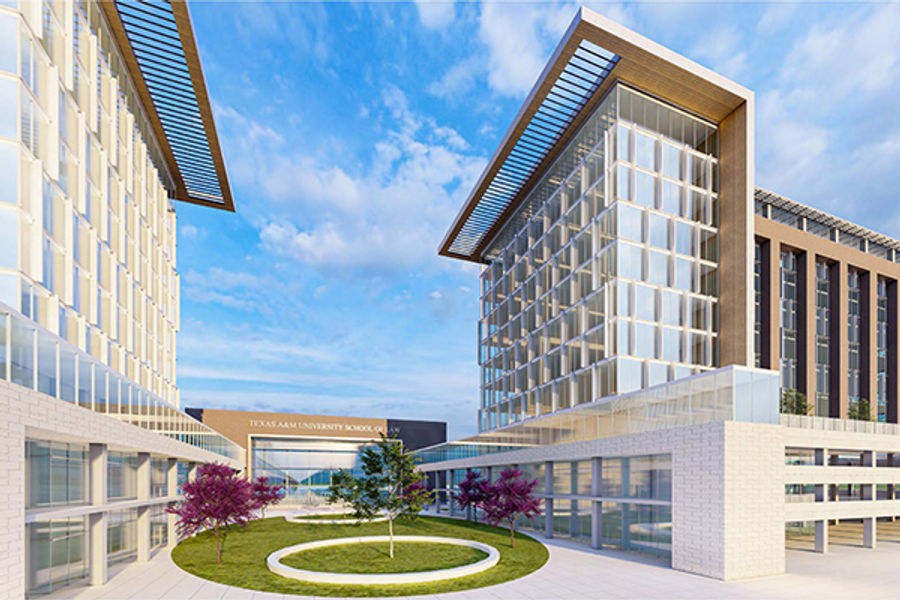 Texas A&M is expanding its presence in downtown Fort Worth. The university announced plans Wednesday to build the city’s first Tier One research university campus around the site of its law school building at 1515 Commerce St.

The project, estimated at $250 million, will have three buildings, including a rebuilt law school building, a research and innovation center, and an education alliance building.

The research and innovation center will work on nutrition research, emergency response, medical technology and advanced manufacturing, although A&M Chancellor John Sharp said this is the tip of the iceberg for the kind of work this center will do.

“Like Einstein said, if we knew what we were doing we wouldn’t call it research,” Sharp said.
Sharp also said the university plans to partner with Bell, Lockheed Martin, AT&T, Alcon, Elbit Systems, and Phillips to collaborate on research projects at the center.

Elabd said the Division of Emergency Management has been collaborating with A&M to research new ways to respond to disasters and emergencies. Fort Worth will be a hub for the division’s research into urban search and rescue operations and communication.

The alliance building will be a hub that will bring courses taught at Tarleton State University and other A&M campuses to downtown Fort Worth. A&M’s College of Engineering as well as Tarleton’s biotech, nursing and criminal justice programs plan to offer courses.

Elabd said A&M will be able to offer Fort Worth residents training certificates in fields like cyber security, advanced manufacturing and jet propulsion to help them land high paying jobs.

Sharp said he expects the development to have an impact similar to A&M’s RELLIS Campus. That project brought together public and private companies to transform the Bryan campus into a hub of engineering, advanced materials and technology research.

“It was a cow pasture, and now there’s a thousand cars a day going through there,” Sharp said.

In Fort Worth, construction will first start on the research and alliance buildings followed by the new law school. Sharp said the law school’s success since A&M acquired it from Texas Wesleyan University in 2013 played a big role in the university’s decision to expand in Fort Worth.

“One of the things we learned from the law school is, man, this is our kinda town,” Sharp said.

A&M doesn’t have an exact timeline for the project’s completion, but the university said it expects to break ground in mid to late 2022. The first two buildings could be completed as soon as a year after the ground breaking.

This kind of project has the potential to reverse the trend of Fort Worth’s growth taking place mostly outside Loop 820, said developer John Goff.

High skilled labor continues to move to the city, Goff said, but Fort Worth needs to be able to educate its local populace, and this project will help achieve that goal.

Mayor Mattie Parker praised A&M’s expansion. She said the project will revitalize the area around the Convention Center and help attract businesses to Fort Worth.

Tier One universities are considered elite research institutions. The recognition is granted by one of three organizations: the Association of American Universities, the Carnegie Foundation for the Advancement of Teaching or the Center for Measuring University Performance. The University of North Texas and UT Arlington are both considered Tier One.

Parker said the lack of a Tier One campus in Fort Worth has held the city back economically.

“Fort Worth deserves to carve out a certain space that is notable for our community, and I think that’s the big win here,” Parker said.