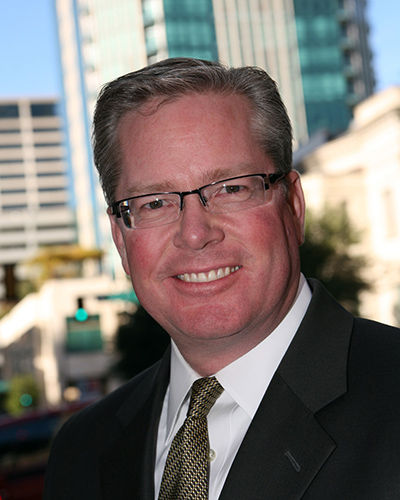 Andy is a native of Tampa, Florida and graduated from the University of South Florida with a degree in Marketing. He began his career in commercial real estate with the Florida Commercial Development Association and then joined Grubb & Ellis of Florida as a commercial real estate salesman in the downtown Tampa market. In 1992, he joined the Tampa Downtown Partnership as its Director of Marketing and Business Development.

Andy served Shreveport, Louisiana’s Downtown Development Authority for six years as its Executive Director and while there was instrumental in relocating City Hall back to downtown, created a new public parking management program and authored the downtown strategic plan. Andy was Chairman of the United Way of NW Louisiana in 2001. Andy was also the President of Downtown Shreveport Unlimited and the Downtown Shreveport Development Corporation.

Andy joined Downtown Fort Worth, Inc. (Texas) as President in 2003. DFWI is Fort Worth’s downtown advocacy organization and it manages the downtown planning process, two Public Improvement Districts, the downtown Tax Increment Finance District, two city parks, the MAIN ST. Fort Worth Arts Festival and Parade of Lights. DFWI developed the JFK Tribute in Fort Worth and is currently leading the $30M Heritage Park development effort. Andy is a past Chairman of the International Downtown Association, Past President of the Rotary Club of Fort Worth and served on the Board of the National Civic League.